Commissioning system belatedly balances £97bn budget. NHS England has belatedly managed to set plans to balance its £97bn budget for 2014-15. The budget has been balanced in part because clinical commissioning groups are expected to perform worse than was budgeted for against income linked performance targets, HSJ has learned. HSJ reported two weeks ago that plans submitted in late June by CCGs and NHS England’s own commissioners showed an aggregate overspend of £137m against the commissioning system’s £97.3bn spending limit for this financial year. NHS England cannot afford for CCGs to reduce their overall surplus this year because it has allocated the entire £400m surplus that commissioners are permitted to “draw down” in 2014-15 to offset a potential £800m overspend in its own specialised commissioning budget. However, HSJ understands that plans are now agreed that would see both the CCG sector and NHS England’s specialised commissioners break even against their overall spending limits. HSJ
NHS finances ‘stretched to limit’. NHS finances have been ‘stretched to the limit’, influential think tank The King’s Fund has warned. The King’s Fund said that there are “huge pressures” on the health service’s purse strings after a quarter of finance directors at hospital trusts in England said they expect to overspend their budgets this year. Its latest report on NHS financial woes found “a distinct lack of optimism about the general state of the finances” with 85 per cent of the 73 finance directors polled saying they were fairly or very pessimistic about money for the next year. The King’s Fund said that “cracks are beginning to appear” in performance as a result of the growing financial pressures. A number of waiting time targets have been missed and the number of people on waiting lists for treatment in hospital is now at its highest level for six years.
Poll shows support for raising taxes to sustain NHS. Voters remain wedded to Britain’s taxpayer-funded model of healthcare even as NHS leaders question its sustainability, according to a Guardian/ICM poll. Analysis by NHS England and outside experts points to a large funding gap that could reach £30bn by the end of the decade, and last month 71 leading lights of the health service wrote to the Guardian to warn politicians that failure to level with the public about the black hole before polling day would jeopardise the service’s future. Asked how they would tackle the future funding of medicine, voters are resolved by a margin of more than two to one that “raising taxes for everybody, to put more money in” is the right way to go. Tax-funded increases in expenditure are preferred by 48% of respondents, while 21% are in favour of charges, such as paying to see the doctor, and 19% would cut the range of available treatments. On the face of it, these results offer some support for the suggestion – debated in Labour circles – of going into the election pledging a ring-fenced national insurance rise to cover NHS spending. 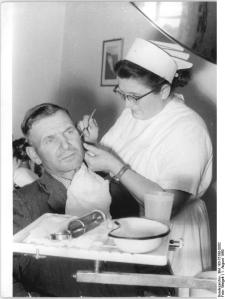 Survey reveals managers’ concerns about integrating health and care:   Moves to integrate health and social care are regarded by many to be the turnkey solution to take the pressure off our healthcare system. The drive towards closer integration of services does makes sense. The case has been made rather convincingly by the leaders in our healthcare system. However, making integrated care a reality will fall to our health and social care managers. In our latest survey of Institute of Healthcare Management (IHM) members, more than half said they didn’t believe that integrated care would take the pressure off the NHS. Doubts were raised about whether the Better Care Fund will be used for its intended purpose, to help reduce occupancy in costly acute services and improve care pathways. Health and wellbeing boards in England have to approve proposals on how the funds are used locally, but managers working for acute providers, particularly foundation trusts, are concerned about their lack of involvement as proposals are developed, and are wary that the funds would not be used to achieve the significant step changes needed. Another anxiety centred around the heavy workloads created by the need to set up new infrastructures for collaborations and integration between the health and care sectors. Managers pointed out that staffing and financial resources were already stretched to breaking point. Many IHM members also signalled their anxiety about whether everybody involved in the integrated care agenda was being fully consulted and, given the significant changes that were already underway in the NHS, whether the timescales envisaged for its implementation were realistic. Guardian

Concordia Health pull out of contract for The Broadway Practice: The Broadway Practice faces an uncertain future after Concordia Health pulled out of the contract to run the GP surgery. The 5,500 patients received letters today dated July 16, informing them that the surgery could be taken on by another provider in April or closed leaving people to join other practices. Concordia Health Limited is contracted by NHS England to provide the care but they asked if their contract could be brought to an end. NHS England has accepted their request and their contract to provide services at The Broadway Practice will end on 31 March 2015. The NHS is now seeking people’s views on whether they should identify an alternative provider or ask patients to register with another GP. The announcement comes after all of the permanent GPs left the practice in June 2012 just seven months into Concordia’s takeover. This exodus led to angry protests from patients about the new management. Thanet Gazette

On TTIP and the NHS, they are trying to bamboozle us: The TTIP trade treaty talks re-open in Brussels this week. We should not be reassured by the convenient ‘leak’ of a private letter between key TTIP advocates claiming the treaty poses no threat to the NHS. The NHS has become a key battleground for the Transatlantic Trade and Investment Partnership (TTIP), the controversial treaty currently being negotiated in secret between the European Commission and the US government. Now that more and more people are becoming aware of the threat that TTIP poses to public services, the European Commission and its friends have found a new and inventive way of trying to bamboozle people into accepting it. On the eve of the sixth round of talks, which begin in Brussels this week, a ‘private’ letter from the EU’s chief negotiator, Ignacio Garcia Bercero, to John Healey MP was conveniently leaked to the Guardian and Financial Times. The letter attempts to downplay the fact that public health services are included in TTIP, suggesting that there is no need to fear for the NHS as a result. The first thing to note is that there is nothing new in the letter, nor any change in the EU’s position. The European Commission has used exactly the same arguments to defend the inclusion of health, education and other public services in all previous trade agreements, as those of us who have been engaged in these debates for the past 20 years know all too well. Yet trade experts point out that public services are still highly vulnerable when they are included in negotiations, particularly when private operators have been granted access to public sector contracts, as is the case with the NHS.

Pricing authorities to tighten grip on specialist service payments. Monitor and NHS England today floated plans to tighten their grip on the pricing of specialist services while mounting a push for local commissioners to move away from national NHS prices. Early proposals for the 2015-16 NHS payment system – published this afternoon – signal the two bodies’ intention to extract greater “value” from hospital services that have no national price and to accelerate “the pace of convergence towards only remunerating efficient costs for specialised services”. They propose to do this either by providing commissioners with new guidance on existing contracting options or by introducing new rules for local price setting in the 2015-16 national tariff.. HSJ

The We Are Primary Care report, jointly developed by Pharmacy Voice, NHS Alliance, the Optical Confederation and the National Community Hearing Association, warned that the future of the NHS was ‘precarious’ if the current medical model was maintained. The report calls for increased investment into community primary care services such as pharmacy and optometry – boosting these services could ease GP workloads and improve patient care, it says. The report calls for all non-emergency treatment, including care for long-term conditions and minor ailments, to be taken out of hospitals and into primary care.But the report said the public’s lack of understanding about primary care, coupled with a ‘dramatic imbalance in funding’ between primary and secondary care, was acting as a ‘significant barrier’ to this move.Members of the public generally have little understanding of what is meant by ‘primary care’ and are ‘confused’ about who can provide it, the report says.